The term biochemical can refer to any chemical compound which is part of the makeup of living cells. The major biochemicals which Worthington purifies are proteins obtained from materials such as pancreas, plant, and fermentation sources and other natural animal-free and animal-sourced substances.

Enzymes are proteins which act as catalysts. Every aspect of life involves chemical reactions. When you eat, starches are broken down into simple sugars; proteins which may come from meat or eggs break down into the simple amino acids which make up the protein. None of these reactions happen spontaneously in your body. Catalysts are needed to get each kind of reaction going, and enzymes are the catalysts used by living organisms.

Enzymes are used in biomedical and life science research applications. An example is the use of an enzyme called collagenase for dissolving the extracellular matix of tissue. All of the cells of any organ are held together by proteins, predominantly collagen. If a scientist wishes to study one particular kind of cell, he can take a sample of tissue, soak it in a solution of the enzyme collagenase, and after some period of time all of the cells will separate from one another, but each cell will still be alive and functioning. Now the scientist can 'plant' one of the individual cells in a petri dish and add some nutrient. If the selected cell has not been damaged, it will divide over and over until new tissue has formed made up of many copies of the original cell. This operation is called 'tissue culture'. 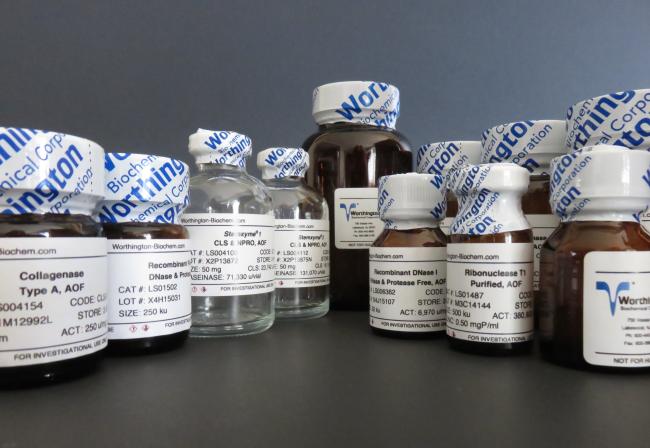 History of the Industry

Major breakthroughs occurred in the 1930's and 40's when researchers were finally learning how to purify individual proteins from crude cell extracts. Biochemistry soon became a field dependent upon highly purified enzymes which in turn could be used to discover more enzymes and other biomolecules and to determine the structure of each different kind of protein.

Biochemical research labs had two important tasks: learning more about proteins, and purifying proteins to expedite that research. As in all scientific endeavor, each lab published its findings so other labs could build on that knowledge. Consequently, a researcher in the 1940's who wished to study the structure of a particular protein would probably contact another research facility and ask them to send a sample of some of the highly purified enzymes its scientists had learned to crystallize. (Crystallized protein was thought to be a protein's purest form.) Since then many other purification methods have been developed.

After World War II Charles Worthington went to work at the Rockefeller Institute as a research assistant to Dr. Moses Kunitz, an early enzyme pioneer. One of his primary tasks was preparing the crystalline enzymes being used for further research. He recognized the need for a commercial source of reliable, high-purity enzymes since researchers had to invest so much time purifying their own. In 1947 he founded the Worthington Biochemical Company in Freehold, New Jersey for the express purpose of preparing enzymes for the growing biochemical research community.

The business was incorporated in 1951 to raise funds for expanding the staff. By 1959 the original facility had been out-grown so a new building was purchased, also in Freehold. Around this time a new field which relied heavily on enzymes had begun developing: clinical diagnostics. Worthington was still virtually alone as a manufacturer of high-purity enzymes and was able to quickly enter this new field.

The demand for kits to do blood analysis work exploded. By the late 1960's Worthington had already outgrown the second plant, and a new facility was built in Freehold to replace it. New investors were also brought into the company to help finance the sudden growth. A public stock offering was made in 1972, and the plant was expanded further. By 1976 Worthington had sales of $18 million a year, employed around 300 people, and had sales offices in Europe, Canada, and California. The research staff in Freehold was already developing products for areas of biochemical research just beginning to evolve: immunology and molecular biology. (Molecular biology is that field of research involved with genetics and DNA/RNA studies.)

Worthington had remained the primary source of high-purity enzymes in the world. Its products were consistently excellent, and the needs and concerns of the research community were the focal point of the company. Worthington pricing was based on cost rather than demand so competition remained minimal. Because of the complex nature of enzymes, no synthetic substances had replaced them as tools for biochemical and biomedical research, and the new areas of research with which Worthington was involved were equally promising for the same reason.

By 1976 the venture capital investors were anxious to sell the company, and the company was sold to the Millipore Corporation of Bedford, Massachusetts. They concentrated on the lucrative clinical market and did not encourage further growth in projects related to either immunology or molecular biology.

Worthington was now called the Worthington Clinical Division of Millipore. The Freehold facility had been further expanded for formulating and packaging large quantities of clinical diagnostic kits; however, minimal facilities improvement or upgrading occurred in the enzyme production areas.

In 1982 Millipore sold its Worthington division to Flow Laboratories. Flow only owned Worthington for a year, then sold Worthington to a California company called Cooper Biomedical.

By the end of 1986 Cooper was trying to sell a number of its companies. Von Worthington, son of Charles Worthington, decided to buy back the family company. Rather than purchase the company, he incorporated a new firm called Worthington Biochemical Corporation and then purchased the inventory and assets of the enzyme division of Cooper. He also hired twenty-four employees from Cooper. The purchase was finalized May 8, 1987.

Sixteen of the current Worthington employees originally worked for Charles Worthington, and two current employees worked at the first Worthington laboratory in the 1950's. This continuity has made it possible to re-establish the quality of the product line to its original level, and by reintroducing its widely regarded publication, the Worthington Enzyme Manual, and other technical resources, the company has once again become a well-known name in the biochemical research community. 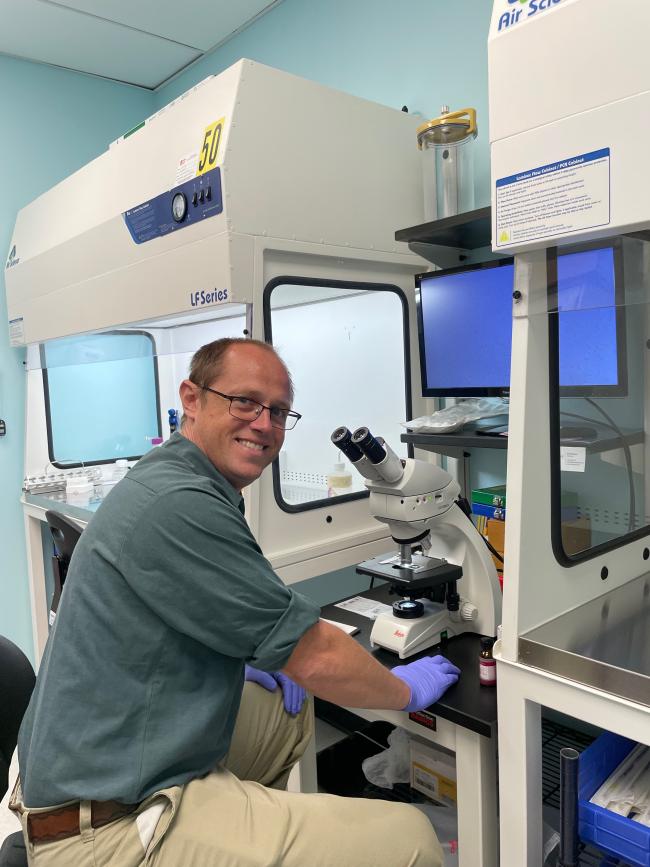