In the adult, epithelium forms tissues such as the epidermis, the glandular appendages of skin, the outer layer of the cornea, the lining of the alimentary and reproductive tracts, peritoneal and serous cavities, and blood and lymph vessels (where it is usually referred to as "endothelium"). Structures derived from outpouchings from the primitive gut, including portions of the liver, pancreas, pituitary, gastric and intestinal glands are also composed of epithelial tissue.

Epithelial cells are typically packed so closely together that there is very little intercellular material between them. An extremely tight bond exists between adjacent cells making dissociation of epithelium a difficult process.

On the lateral surfaces of adjacent epithelial cells there are four distinct types of intercellular bonds: the zonula occludens, zonula adherens, macula adherens and nexus. The former three are often closely associated to form a junctional complex. In the zonula occludens, or "tight junction," there are multiple sites of actual fusion of the adjacent unit membranes interspersed by short regions of unit membrane separation of approximately 100-150 Å. In a zonula adherens, or "intermediate junction," a fine network of cytoplasmic filaments radiates from the cell membrane into the cytoplasm. The space between unit membranes of adjacent cells is approximately 150-200 Å and is composed of an intercellular amorphous substance of unknown composition. In the macula adherens, or "desmosome," there is a somewhat similar array of intracellular filaments. The adjacent unit membrane space is approximately 150-200 Å and consists of an extracellular protein and glycoprotein ground substance, often with an electron-dense bar visible within it. The integrity of the desmosome requires calcium, and it is broken down by EDTA and calcium-free media. The enzymes collagenase, trypsin and hyaluronidase can also dissociate the desmosome. The nexus, or "gap junction", covers most of the epithelial cell surface. In these areas, the unit membranes appear tightly attached and are separated by only 20 Å. The intercellular material consists of an amorphous, darkly-staining substance.

On the basal surface of the epithelium where it overlays connective tissue, there is an extracellular bonding layer or sheet called the basal lamina. The lamina is composed of a network of fine, collagen-like reticular fibers embedded in an amorphous matrix of high and low molecular weight glycoproteins. 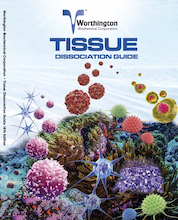